Il has been almost 50 years since we can find simulation software somewhat accessible. Since then, they have had to meet the demand of the market and to change with it – demand for a more adapted user interface (everything used to be programmed and the user interface was very austere), need for simultaneously continuous and discrete flows in the same model (in the 90’s mixing the two kinds of flow was impossible!), necessity of a high quality 3D animation (at the turn of the century, it felt more like an irrelevant luxury, very costly in development and computing time…). Now the ambitions of the models are widening and sometimes one expects to simulate a system over years, involving an impressive corpus of data which is not easy to deal with for many simulation software packages.

We had to simulate flows of passengers for the Paris Roissy Charles de Gaulle airport (CDG), taking into account planes, luggage, passengers, shuttles, and so on over several months. The simulation model was related to a huge database of passengers and traffic, so as to produce predictive information about passengers in the airport, and could follow each single passenger from landing (or arrival at the airport) to take off (or exit from the airport).

Every day 100,000 passengers go through CDG airport, making it the second Hub for passengers in Europe. Half of these passengers are connecting travelers arriving from a landing plane and having to catch an outgoing plane through a complex set of walkways, escalators, security control, bus and shuttle network.

A very gratifying aspect was that, due to the ergonomic interface for end-users, along with database links for input and output data, the model helped –and still helps– airport operators to reduce missed connection percentage, and to plan airport modifications and organization. 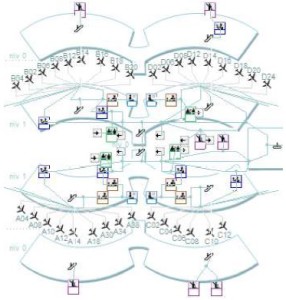 CDG passenger airport has seven terminals connected through a network of walkways, buses, escalators and security lines. Each terminal serves tens of connected and remote plane parking, making it a huge maze for passengers having to hurry to catch their plane. Queuing at different security check-points or having access to a bus depends highly on planes parking affectation, security lines staffing and busses capacity and timetables. Only a comprehensive simulation taking into account individually each passenger could help understand and evaluate the impact of big and small changes in the airport design and/or organization.

Table below gives an idea of the model size to be taken into account in the simulation.

The model had to meet several goals in terms of short-term and long-term decisions. But medium-term decisions taken twice a year -before each new aerial season- imply that the model would be used on a regular basis by end-users who are decision-makers and should be autonomous when using the simulation model. So the interface had to be as user-friendly as possible and computing time short enough to enable users to try and compare different scenarios during their decision process, independently from any third party consultant and/or programmer.

Two constraints drove our software choice in this project:

The core simulation model was built with ExtendSim. We created a dedicated, versatile custom library containing objects (parking locations, escalators, buses, security checkpoints, etc.) that we were able to link together to build the CDG airport network. ExtendSim having its own internal database, we considered using it for all data – something very effective in terms of calculation time, as the model needed to access continuously the database to get data but also to write details of every event concerning each passenger.

But customer data were already stored in a Microsoft Access application, and as we needed user-friendly custom data input forms as well as specific versatile output data analyses, we decided to link ExtendSim with MS Access and to code all data input and result analyses inside MS Access.

Now the airport operator has a tool enabling him to automatically import detailed traffic forecast already existing in an MS Access database and to set up the model parameters through a Microsoft Access application containing custom forms. Running one model takes less than 5 minutes for one operatinf day with 100,000 passengers. As the model exports raw output data for all events occurring to each passenger, the end-user can also use MS Access data-mining capabilities to make fine analyses of results, for example by filtering passengers having missed their connection, looking in detail at the reasons why connections were missed.