EVERYTHING YOU ALWAYS WANTED TO KNOW ABOUT STACKING CONVEYORS

(But were afraid to ask)

We aim to provide a better understanding of the dynamics of production systems consisting of equipments separated by single line stacking conveyors. Understanding the full implication of the density, the sensor position, the timeout duration, the stacking point, and getting to know how to calculate them is of major importance in all industrial simulation models using staking conveyors.

Packing lines are the last step in a production process. They are in most cases the “poor cousin” of the plant, not much considered by engineers more keen on focusing on processes that create the product. Some say: “What interest could there be in putting a product already made into bottles, tubes or flasks? Only the content matters.” We think the exact opposite: there are major challenges and skillful issues on everything related to packaging, starting with conveyors.

We’d like to provide a better understanding of the dynamics of production systems consisting of steps separated by single line stacking conveyors. We are considering high speed production system (several hundreds of units per minute) for which using single items to simulate each individual product would be very inefficient in terms of computing time. This is the case for most packing lines in the food, beverage or healthcare industry. But the same principles could easily be applied to other processes that are not packing, provided that they consist in production steps in line separated by single line stacking conveyors.

We will study the simple case of two machines in line separated by a stacking conveyor. Most packing lines are much more complex and have more than two machines. But we do think that the precise understanding of a simple system dynamics is crucial for those who want to correctly simulate and efficiently setup complex lines.

Upstream is the part of the line from where products are coming (bottles, flasks). Downstream is the other part.

Density on the conveyor

It may seem weird to talk about density on a conveyor that contains separate items. But if you step back from the conveyor and consider the conveyor as a succession of lengths more or less filled, density does make some sense. The following figures illustrate this point. 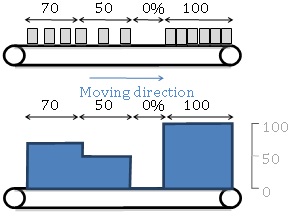 The second representation (with the blue curve) is the one we will use the most, and you’ll see that it is very convenient – also saving a lot of time because you do not need to draw each bottle. The percentage corresponds to the percentage of space occupied by bottles. In fact, density is this percentage multiplied by the maximum number of bottles a length unit can hold (we are talking about number of bottles per linear meter on the conveyor). If we think about each single bottle on the conveyor we could be tempted to say that the conveyor is just a succession of zones filled at 100% (there is a bottle here) or at 0% (there’s nothing here). If you have small bottles compared to the conveyor's length and high production rates, the density approach is both efficient and accurate. 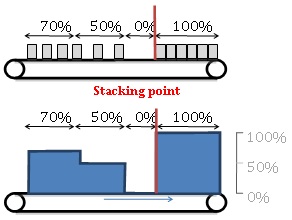 We also talk about a filling level of 100%. It is now interesting to understand that this point can move very fast on the conveyor. Even much faster than the conveyor speed itself. Example: In the following situation the conveyor works 1.5 faster than upstream and downstream machines.

To simplify notations, we consider that when bottles are touching each other we have a filling (R) of 100% (It is easier to talk about a filling percentage than about a density per meter).

Some breakdown downstream will cause bottles to stack. After a ½ second breakdown the stacking point is already at x = 150 cm

R is the density just upstream the stacking point.

Note: We are talking about absolute values for Vf and Vc. We could also write:

Graphical f with densities allows you to better understand this formula.

To get a progression of stacking point you need to “fill” 1-R part with bottles. They are brought by conveyor with a rate of R * Vc. As you fill « 1-R » (empty space to be filled) stacking point speed is R * Vc / (1-R)

Knowing the stacking point position on a conveyor is, as we will see, very important for the packing line’s behavior.

On the previous drawing it is easy to understand that a non-stacked passing bottle should not be mistaken for a stacking point position indication. To avoid a short reaction of the sensor each time a bottle is passing (we want to know the stacking point position, we are not counting bottles) there is a timeout linked to the sensor. Sensor reacts only when obstruction is longer than a given duration. This means that the sensor gives its information with a slight delay (we’ll see that this delay can be adjusted and intentionally long). 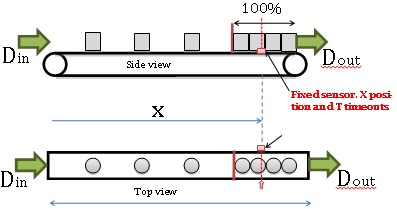 A standard packing line normally consists of a succession of many equipments linked by conveyors. We have chosen here a very simple particular case with one upstream machine, one conveyor and one downstream machine. This very simple example will still be enough to illustrate important principles.

Its is frequent to think that conveyors' stacking capability is only here to protect machines from a failure of the other machines. Surprisingly people accept the idea of frequent breakdowns but consider obvious that a machine should be set up at the same nominal speed all along the packing line.

In fact, even on an appropriately-sized line, equipments have different speeds, for process or quality reasons. As a consequence of this, you will see conveyors being filled, upstream machines stopped, then conveyors unfilled, at unpredictable frequencies. Some talk about a sort of wave on the conveyor. We will see how intelligent positioning of sensors and setting of timeouts can minimize these stops and starts.

Upstream starts again when sensor is unhidden (stacking point down to x again).
Sensor position: What value (in meters from the conveyor entrance) should we set for x?
Timeout: What value should we set for T (seconds)?
What can happen if x and T are not well set up?
What can we optimize in this system playing only with x and T?

Playing with x and T we have 3 aims:

Situation at the start of stacking: stacking point just covered sensor at x. Of course, this only happens if Din > Dout (we implicitly chose it to be like this in this case). Upstream will be stopped in T seconds (timeout). We don’t have an overstacking if conveyor is not full before T seconds. This can be expressed with the following equation:

The further from upstream machine the sensor is, the shorter is the timeout and the less risk of over-stacking we have. 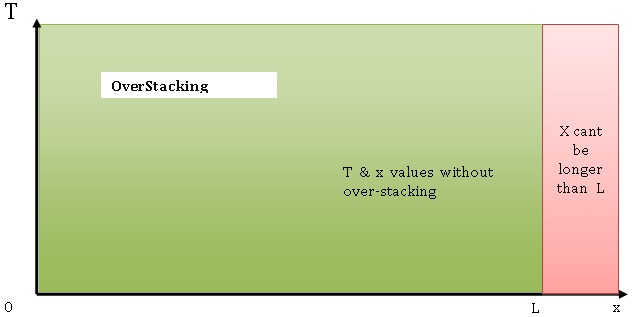 t=T upstream machine is stopped. But stacking is still ongoing on the space upstream the stacking point.

t<T+Toff  during a first phase we will call phase a, the stacking point is moving upstream while the last bottle moves downstream.

t<T+Toff  during the following phase (phase b), the stacking point moves back downstream.

How can we calculate Toff?

The situation at t=T is the following:

When the upstream machine is stopped, it is mandatory to "pull" all bottles upstream the sensor, so that the sensor is uncovered again. The quantity to pull is given by the following formula:

The time for these bottles to be all pulled depends on the machine and is given by the following formula:

The time for these bottles to be all pulled depends on the machine and is given by the following formula:

Activity period of the upstream machine:

Toff = off duration of upstream machine

Ton = on duration of upstream machine

See what happens after the upstream machine is put back to work. 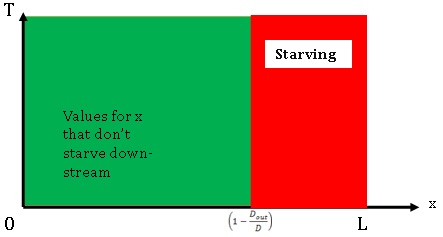 If you don’t starve the downstream machine, it will operate at a rate of Dout. 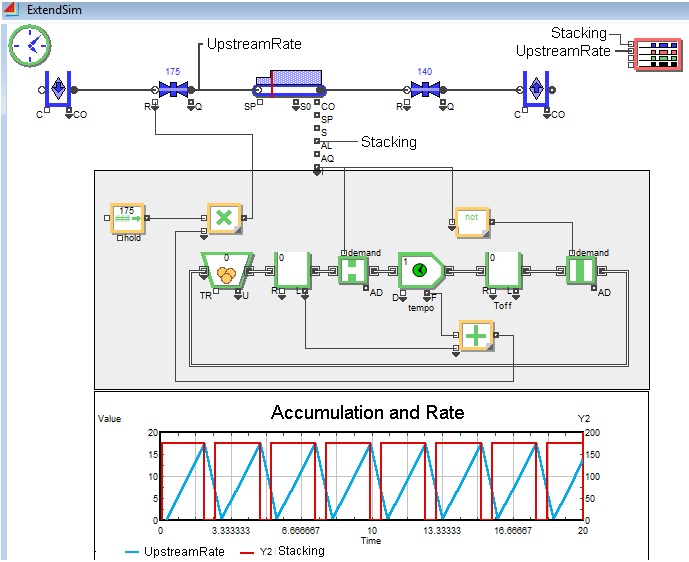