Industrial simulation is often used to obtain better performance from a production system, or to ensure the appropriateness of investments before realization. The modeler creates a model on which experiments will be conducted. A packing line reveals efficient when producing 40g packs, but much less when producing 20g packs. What is the problem? Where should actions be taken? Simulation makes it possible to test various solutions and measure their impact.

In the world of industry, the metrics used to measure performance are called the Overall Equipment Effectiveness (OEE). It is a ratio between the number of good parts actually produced and the number of parts produced at normal rate during a certain period of time. OEE also indicates potential sources of productivity. 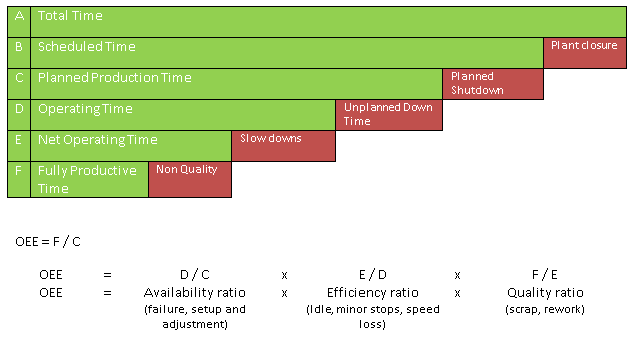 To increase effectiveness, the three components of OEE must be improved – Availability, Performance, Quality.

Simulation helps mostly in acting on ratios like Availability and Performance. Some of the typical "big losses" are enhanced by optimizing flows using a simulation model:

The figure below shows a packing line in the food industry. Conveyors are used as buffers between machines. Stops that cannot be avoided on any machine will not affect the other machines if conveyors are correctly sized.